Welcome to Virtual Hub! In order for you to make posts and download resources, please take a moment to Log in or Register.

Some angry birds pig looking thing with a sparkler

The Modding Union
The People
#42
Hey there! 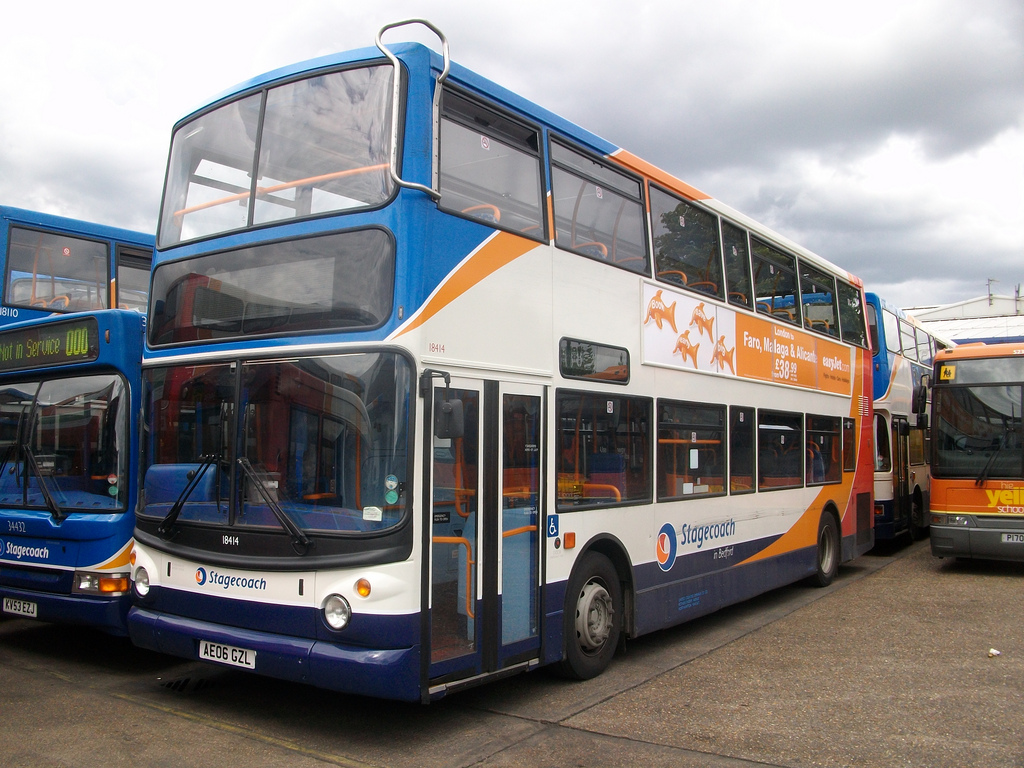 Admin
NELOG
The People
#43
Welcome to the forum guys

INACTIVE (leaving VB due to issues with others)

The People
#44
Well, I came here because I wanted to be here. That is as boring as it sounds. Sorry for this inconvenience.
Yes, It is me if you were wondering
T

The People
#46
I’ve joined here a while ago but I haven’t introduced myself on here.

I’m 14 years old, and I live in Cambridgeshire. My favourite bus is the Volvo B7L East Lancs Nordic, I would like to create one for OMSI, but I have 0 knowledge of modelling let alone scripts. Favourite train is the Class 365.
T

The People
#48
Hey everyone,

My name is Kyle and I'm from Scotland, i make repaints for omsi, mainly McGill's, as you may have guessed ,
I do make other repaints for other companies, but I was trying to get McGill's into the game, with interiors and stuff.
My favorite bus would have to be either a Mercedes-Benz Citaro or a scania omnicity (single decker)

thats pretty much all i could say, i hope you have a brilliant day!
- KM
C

#50
So wats up guys I'm Bob in Selby Yorkshire UK my favorite bus line are
is the 415 Selby to York and city zap Leeds to York fast and the Yorkshire coastline b5tl
And the tpe 185
Bye
Last edited by a moderator: Jan 7, 2019

The People
#51
Hello there!

I'm Sean, i'm originally from York, but I've moved to Stockport as of recently with family. I'm the funder of the Wright Eclipse Urban coming to OMSI later this year, and if you haven't guessed, the Eclipse Urban is my favorite bus! And my favorite company is First

The People
#52
Hi, I'm Aaron and from Bath - I am trying to get into developing and repainting, but I'm not sure where to start. Still, I'm more than happy to share my knowledge with anybody, and also more than eager to learn new things. I love a good Volvo - the B7 Voith Euro 4 Eclipse being my favourite bus - and even though my local operator is First, I prefer any other bus company, frankly because they're always bloody late.

You may also know me as Sudan_III, but I tend to use the two aliases on everything except YouTube - my channel being Noice Shinyplamz. You may tend to see me on Badger's livestreams quite often.

Developer of the Bristol Airport map.

I'm FirstEnviro, you'll probably recognise me for my work on the Bristol Airport shuttle map.
So, a little bit about me. I'm 19 years old and currently in a full-time apprenticeship working in software engineering. I am a huge aviation geek/nerd/fan, call it what you will. I've been in love with commercial aviation since I can remember clearly and eventually aspire to become a commercial aircraft pilot (lol). I've also recently, in the past couple years, gotten into public transport and evidently, buses and am always learning new things here. So if I act like I don't know what you're on about when talking about buses, don't be afraid to explain to me, I'm always willing to learn more.
I got into OMSI map development back in July 2018 and starting from knowing nothing about the editor, to the point where I managed to release my first map in December 2018.
I'm currently working on the Bristol Airport map by expanding it into the centre of Bristol, which will obviously take some time. I'm also working on a second project which I am not announcing yet, watch this space.
I plan to bring a lot more into this community and hope to learn a lot more about VirtualBus, and even buses!
I'm a generally all round nice person and always willing to have a nice chat. I do try not to be too serious, but sometimes I can't help it!
A

The People
#54
Hi,
I am AceBatler.
My favourite bus is the entire Alexander Dennis Enviro 400 series

I like hk Dennis well.. any product related to hk

The People
#55
Hello,
I am Nikel Mendes, I'm 16 and I love anime, trucks, buses and oddly enough trailers (trucks only)
my favourite buses is normally a mix of old and new but I'll list some out Dennis Dragon (any length), Leyland National and etc. Trucks is Daf(any), Scania R&S series 2016 next gen, 4 Series and below. I play omsi2, do repaints or hofs in my spare time or watch a few videos. Also would like to note that I'm not the best at English or grammar at all. I would also like to point that I like making new friends or talking to people.

Moderator
The Modding Union
The Painting Union
The People
#56
I'm Jem, I live basically anywhere south of Watford, but for now I've found home in Brighton. I do some photgraphy and mainly repaints, but I dabble in a pretty much everything short of baking making a bus*.

The People
#57
Since I never did it, i'm going to introduce myself now. I am some random person from Essex, who likes all forms of transport. I started playing simulator games since when I got Train Simulator in 2012. I ended up getting OMSI 2 in 2015 and only discovered that UK OMSI content exists through YouTube. I have tried making repaints, maps, and buses in the past but all have failed horribly.
A Sharking Person

Or previously known as TBG

The People
#59
Hi everyone,

I'm OptareSpectraStagecoach, and as you can see by my name, I absolutely love Optare Spectras.
You might already know me from my FellowsFilm account LeylandNationalStagecoach, or my Britbus account OptareDeltaStagecoach,
but just in case you don't, here we go: As some of you know, I'm a macOS user, and years ago in 2011 I got OMSI 1 installed via Bootcamp. I really liked it, but it did get boring as we didn't have any mods at the time, so we sold it again after about a year.

I started finding out about a lot of amazing looking mods for OMSI 2, so then it was October 2017 when I got OMSI 2, and I wanted to play it via a freeware Windows>Mac program called Porting Kit. I tried installing it a lot of times, but as soon as I started it in Steam, I always got a DirectX error (which I later found out came because Porting Kit only emulated Windows Steam and the games, not the actual Windows operating system). I tried many times to get the problem fixed, but to no avail.

Last year I got a payware program called Parallels 13 to emulate Windows on macOS. I tried installing Train Sim World on that, but it always crashed when I went into the game. Then there was a lot of other non-gaming stuff going on meaning I couldn't do stuff with Parallels for that time.

I joined the FellowsFilm forums last summer, before I had even played OMSI 2, and was pretty active on there, helping out people where I could (obviously not that much as I wasn't familiar with how OMSI 2 works).

Then, a few months ago I had the time for Parallels, thus I updated it to Parallels 14 installed OMSI 2 in it. I started it, half expecting it to not work, but, it did work. I was very happy at that point.
Soon after, I installed a lot of mods for it, the first of which being the Xmas variant of the stock MAN SD200 available on lotusmods, and then all the UK buses and maps.

I then got an amazing friend in January this year, Ecronbuses on FellowsFilm. Soon after, he has told me that he's reccomended me to another FellowsFilm member, georgeloxton02 to join his Virtual Bus Company GeorgeBus. Of course I agreed, made friends with George too and had many happy shifts with GeorgeBus until that VBC sadly went down for various reasons I don't want to get into here.

We still remained friends though, getting all of our last powers together to create an amazing and fully functional bus for OMSI 2, the Scania OmniDekka.
Ecron provided us with reference pics for the OmniDekka, and George said he'll do the scripts for the Dekka as he knows how to script.
And since I'm arguably the best at Blender out of the group, it was my job to do the model (which I'm still doing by the way) which went, and still goes really well.

I then found this forum and the BritBus forum (I think they were links to these forums in someone's signature), so I thought I'd join them too.

Then another member called Liam_TheKilla who was previously a member of GeorgeBus joined our team, offering additional scripting work, also doing amazing Twitch livestreams talking with us and giving us a lot of kind support for the project. He asked me if I could do a Volvo B8RLE too, and of course I said yes, so now I'm doing the models for both buses! I have a lot of future plans too, which may or may not be actually realised, including a Caetano Nimbus and or Urbanstar.

Thanks for taking your time to read my introduction.
Last edited: May 18, 2019
- OptareSpectraStagecoach
H

The People
#60
Did one of these in December, but I want to update and go into more detail.

As of posting, I am 14, and I was born and being 'raised' in Cambridgeshire. It's somewhat nice to think I have never moved house, and I live right next to an Every 20 Minute bus service operated by Stagecoach. I can be easily irritated, which can be an issue since I'm now at a point in school where it's exams exams exams. I do have many favourite buses, in types, batches, and individual buses. Examples are East Lancs Nordics, AE06 GZH/J/K/L/M, P927 MKL, and many more. I do plan on being a bus driver in the future with Stagecoach. I am also a train spotter, favourite train being the Class 365, and I also Bus/Train Spot in France, mostly around Lyon and Department Isere, favourite Network over in France is Sytral's TCL, with Buses, Trams, Metros and Funiculars, all good fun.